February 10, 2014 [Addis Ababa] – A new round of peace talks between South Sudan’s government and rebels aimed at ending a nearly two-month-old conflict in the world’s youngest nation has been postponed, officials said on Monday.

The talks, which were due to open in Ethiopia, are aimed at building on a shaky ceasefire agreement and bringing about a comprehensive and durable solution by addressing the root causes of the conflict.

“The talks are not resuming today,” South Sudan government spokesperson Michael Makuei told AFP, without providing an explanation for the delay. A government official from host country Ethiopia confirmed the postponement.

Makuei said the talks were now set to begin on Tuesday afternoon.

“We are informed that his excellency the prime minister of Ethiopia wants to attend the opening session. We are told that it is tomorrow afternoon,” Makuei said.

Peace delegates loyal to South Sudan’s President Salva Kiir and supporters of rebel leader Riek Machar, a former vice president, signed a ceasefire on 23 January although fighting has continued in the oil-rich but impoverished country, which won independence from Khartoum in 2011.

The conflict, which started in the capital Juba and spread rapidly to different parts of the country, has left thousands dead since mid-December and has caused close to 900 000 others to flee their homes.

The conflict has also had a tribal dimension, with the two largest ethnic communities, the Dinka, to which Kiir belongs, and Machar’s group the Nuer, both carrying out ethnic massacres.

A rebel spokesperson had said earlier on Monday that his delegation wanted the release of four out of 11 political figures – presented as being close to Machar – still in detention in South Sudan’s capital. 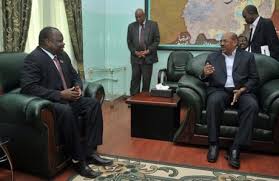 “We are still requesting, or demanding, the release of the remaining detainees,” rebel spokesperson Yohanis Musa Pouk told AFP, adding that the rebels also wanted Kiir to step down until elections are held in 2015.

“We should have an independent person that can lead the government until we go to elections. President Kiir is not the right person at this time,” he said.

Pouk also said he was not optimistic about the success of the negotiations “because we know that our government is not serious about the talks”.

Eleven South Sudanese political figures were arrested in Juba when the fighting broke out there in mid-December. Seven of them were freed at the end of January and are set to take part in the new negotiations, according to IGAD, the regional grouping that is helping mediate the talks.

The government side wants to try the four who are still detained, along with two other political figures – including Machar himself – who are on the run.

The detainees had been a major obstacle to progress in the first round which led to the ceasefire agreement, and the fate of the four is set to come up again in the latest talks.

The military situation in large parts of this vast country practically devoid of infrastructure remains unclear.

During the two-week break in talks IGAD said its mediators briefed the heads of state of member countries, and that the first IGAD officials tasked with monitoring the implementation of the ceasefire were also deployed.

Analysts warned against over-optimism on the talks.

“The negotiations are a stopgap measure at best: the institutional deficiencies that have brought about the violence remain,” wrote Peter Biar Ajak, director of the Centre for Strategic Analysis and Research in Juba.

“For its [own] sake and the sake of this young country, the political leadership of South Sudan must complete the task it aborted of building basic institutions of governance,” Ajak said in an op-ed in the International New York Times last week.

No agenda for South Sudan talks in Ethiopia

Dr. Machar Was Not Threatened In Addis Ababa, He Was Warmly Welcomed!

Obama’s message to the congress on South Sudan Sanctions

Opinion: The bloody power struggle for succession and the enemies from within

South Sudan has Killed its Best: In Memory of Kerbino Wol, South Sudanese Businessman and Philanthropist

Opinion: How Nilepet should takeover petroleum operations as an independent oil operator in 2027?

Opinion: The bloody power struggle for succession and the enemies from within

South Sudan has Killed its Best: In Memory of Kerbino Wol, South Sudanese Businessman and Philanthropist