JUBA – International flights into South Sudan’s capital Juba are full, motorbikes are weaving between the bumper to bumper traffic and the shops are open.

February 19, 2014 [AFP] — A stark contrast to late December, when only soldiers with heavy machine guns occupied streets after a political crisis set the city on fire before the conflict blazed northwards.

On the surface, life is back to normal. But the almost 45,000 people huddled in two bases belonging to the United Nations Peacekeeping Mission in South Sudan (UNMISS) tell a different story.

“We are being forced here by the war,” says student John Chuol.

“There is not peace. If you go to your house now you’ll be killed,” he says, resigned to staying in a cramped, squalid camp forever unless the UN can transfer him to another country.

The camps are a result of a power struggle between leaders from the country’s two largest Dinka and Nuer ethnic groups. A fight between President Salva Kiir — who is accused of running a “Dinkocracy” — and Riek Machar, a Nuer, splintered the army and awoke old rivalries.

Increasing ethnic violence seeded in Juba has spread across the country like a cancer, annexing whole communities now being categorised and mobilised by clan, and has trumped any notion of national unity less than three years after South Sudan won independence from Khartoum.

– Soldiers on the hunt –

“This morning they (soldiers) were there, at the gate of UNMISS, looking for people,” says Chuol. Akoy says they returned in the afternoon.

Many reports have been heard from different UN bases of shots fired inside, fences breached and people executed. Now, only women leave the camp by day for water or food, after too many men simply disappeared.

“They (soldiers) want to kill these people. They make it a kind of civil war between Dinka and Nuer, and they target us,” says Chuol.

Close to 900,000 people nationwide have been displaced by the conflict, many of them to UN bases. They are sheltering according to which ethnic group is deemed to rule the city. In Juba, almost all the 43,000 camp residents are ethnic Nuer, hiding from their own army.

The government has announced the arrest of 100 soldiers in Juba for ethnic killings that survivors describe as days of house-to-house executions. Whole Nuer neighbourhoods were reduced to rubble and homes to ashes-some with owners trapped inside.

In the camp’s “VIP area”, former politicians talk of a police state in which they are prisoners metres from their own homes.

“I’ve got my own house with all the services. Here, I sleep in the dust” with no showers and 300 people per toilet, says one of many who would not give his name.

He says that any attempt to board a flight out of the country involves seeking approval from two ministries and then security forces that have dragged other leading politicians off flights and placed them under house arrest.

Non VIPs claim that they would just receive a bullet to the head, and say people heading south by road to Uganda have been dragged off buses and not heard from since. Uganda’s military support to South Sudan has further deterred any movement south.

South Sudan’s President Kiir maintains the war started because Machar, a former vice president seen as a main challenger in elections due in 2015, had attempted a coup on December 15.

Machar denies attempting a coup, and many diplomats also point to Kiir’s desire to stave off a leadership challenge by sacking Machar, then the cabinet and various army chiefs — actions that were bound to push the country into conflict. 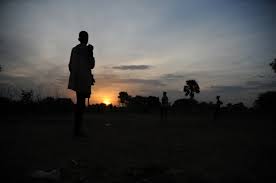 “All the Nuer, they have left,” while foreigners are slowly returning “as the guns have stopped and it’s safe”, he says.

But with often farcical peace talks in Ethiopia making little headway and the buzz of military helicopters overhead providing a constant reminder that the war is far from over, he and other businesses now only accept US Dollars.

Perched on his motorbike taxi next to a bustling market, Omar Amule says that three of South Sudan’s 10 states might be at war, “but Juba is normal… we are now free and working”.

That is except for the ethnic Nuer: “They’re all at the UN camp. You go there,” he advises.

And in the camp, they are fading.

“We see some children dying here in the hospital because they are very, very weak” says Anna Cilliers, a nurse for emergency charity Doctors Without Borders (Medecins Sans Frontieres, MSF).

“Out of the 39 cases yesterday, we had 35 children malnourished”, she adds, rocking a feverous, withering 6-week-old orphan.

The lack of shelter, food and sanitation means “disease is rife”, Cilliers says. And things will only get worse when the rains start in April.

One western diplomat says that for the international community, that helped deliver and nurture the world’s newest nation with years of talks and billions in aid, “it’s not business as usual”.

“We can’t go back to the way things were. I mean, look at what happened here,” one diplomat said, adding that with rampant killings there was now “a question of legitimacy” hanging over the very idea of South Sudan.

Opinion: Somalization of Panyijiar County politics is blamed on SPLM-IO

Opinion: Somalization of Panyijiar County politics is blamed on SPLM-IO